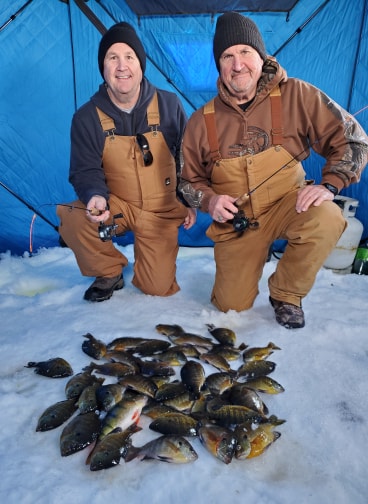 The conditions of the ice have improved across the area significantly over the past few weeks. The smaller bodies of water which were just a mess of slush not too long ago have healed up for the most part and attracting anglers back out. The snow has settled; however, travel is still best using sleds or track machines since many lakes still have no plowed roads. You can still find a few pockets of slush on larger bodies of water such as Leech Lake, but there are plowed and maintained roads on Walker Bay and out of Pine Point and Trappers Landing Lodge.

FISHING HAS PICKED UP!

Panfish: The bluegills have been biting great along the weed lines Tungsten jigs and small spoons tipped with waxies have been the ticket. The Venom Outdoors tungsten jigs have been producing the numbers, where as the Pinhead Minnow by Clam has been enticing the larger gills in the 9” and over range, which has been helpful when you have a mixed school of sizes. Having the opportunity to sight fish is also a benefit, pulling the lure away from smaller ones coming in while playing out the larger ones. The Crappies are in the basins during the day (depth will vary depending on body of water) and look to the edges of those basins towards dusk. Weed line points or inside turns are a key area for those night dwellers. During the day we are using the Clam Pinhead Minnow and Venom Inferno spoons tipped with plastics. Drilling out the basins and hole hopping, staying mobile has produced great results. The night bite has been best with a JT Snare rod setline and a Crappie Minnow, or catch the biggest Crappies in the school by tossing down a glow jigging spoon tipped with a whole Crappie Minnow.

Walleye: The bite has slowed slightly as we are within our final weeks of our inland Walleye season, but we have managed to get more than a few topside. Walleye can be found on a late bite in 24-32 feet of water over structure like rock bars and sunken humps, an underwater camera like a Vexilar Fish-Scout can help greatly in finding the structure. Aggressive walleye have been hitting spoons like a Northland Buckshot tipped with a minnow, where as a setline might attract the ones that are a little reluctant to strike.

Trout: The Lake Trout bite slowed down a tad which tends to happen around this time every year, but we suspect it to pick up soon. Your best luck is going to be in finding areas that have received low to no angling pressure in 25’-70’ of water. Spoons, Tubes and Rattle Baits have been best. Look to structure like points, inside turns, sunken humps, and steep shelves. Stream Trout are being caught in our local lakes still in 4’-10’ on small jigging spoons and jigs tipped with Clam Plastics.

Our books are now open for our open water season! Next Up… Rainy River!! Come enjoy the extended walleye season with Captain Justin Wiese on one of the most renowned walleye fisheries in the world. Visit our website or give us a call at 218-275-7525 for more details!