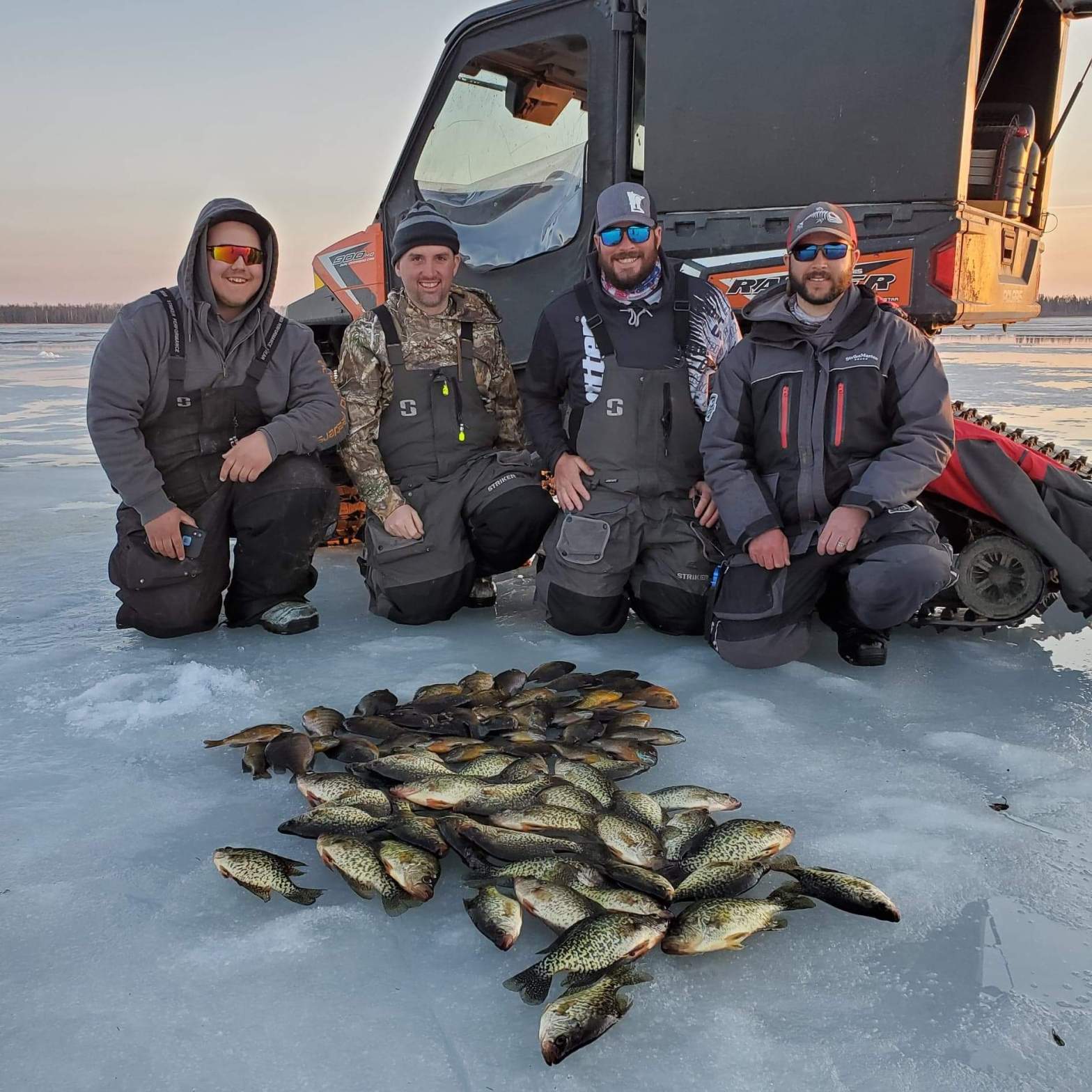 March Madness is here!… but we’re not talking about basketball!

Well, it’s that time of year again, late season ice fishing! March is when the epic late ice bite begins for Panfish! The longer days and warmer temperatures start to settle and thaw the snow atop the ice. This allows more light to transmit through, and the water caused by that which is melting drains back into the lake which in turn creates more oxygen- all of which puts the Crappies, Sunfish, and Perch on the chow! As these fish begin to leave the basins and stack up along the edges to start their spring-time transition, they can be eager to bite! Targeting them can lead to high success in numbers and a good time to be had by all!

The Jumbo Perch are Always a Prime Target This Time of Year!

On larger bodies of water like Winnibigoshish Lake, Leech Lake, and Bowstring Lake it is common to see the Perch start to school up on the shallow sand and weed flats chasing the bait fish. Late ice perch can be a lot of fun because they are generally easy to target and can provide consistent action with high numbers. Not to mention they taste incredible and are always a Minnesota table favorite!

When we set out to target jumbo perch, we will focus on areas in and around 5′ to 10′ feet of water. For our presentations we generally favor using spoons, like the Clam Leech Flutter Spoon. We also have great success using tungsten jigs tipped with plastics, all in various colors. Now, being that shallow, these fish can “spook” easily due to surface noise. To avert this, we drill all our holes immediately, spread out over these flats. From there we simply “hole-hop” utilizing our Vexilar units until we catch up with the active school. We tend to maintain a fairly aggressive jigging pattern pulling it away from the smaller fish in the school and enticing the larger more active fish to strike.

Sunfish and Crappies Begin Their Transition

Common areas for Crappies and Sunfish will vary from lake to lake. On some lakes the fish will be found within the pockets of the large cabbage beds. Whereas on others they can be found along the breaks leading into their usual spawning areas as they begin to prepare and stage for this annual event. The best tool we have found to find these fish is an underwater camera like the Vexilar Scout. A simple tungsten with a piece of beaver tail or plastic is a highly effective presentation. We have also found utilizing the weed mode on our Vexilars to be very helpful. The weed mode will provide better individual target separation while fishing thick weeds, allowing you to clearly see your lure and depict the fish over the weed stalks.

Admittedly, we are minimalists when it comes to set-up for targeting any of the three species described. Our favorite rigs include an in-line reel spooled with either 2lb-3lb mono or fluorocarbon, and a light or ultra-light actioned rod, 32”-36” in length. We do tend to prefer the longer rods while we are out of shelters hole-hoping as it allows you to stand away from the hole. Longer ice rods also allow for the opportunity of a more adequate hook-set which can make a huge difference, esepcially if the fish are soft to bite.

No Ice is Safe Ice!

Of course, as we come to a close, we want to stress on the importance of safety. Late Season Ice can be the most dangerous ice of the season. As snow melts and drains into the lake, and also as water on top of the ice can be moved by the wind, the ice can deteriorate rather quickly and be extremely inconsistent in thickness. Typically, the shorelines are the weakest, along with the river inlets and outlets due to current and moving water. So as always, we advise extreme caution. Go with a friend, never by yourself. Carry all ice safety gear including ice picks, a rope, and either a tossable floatation device, or wearing a life jacket or float suit. Take care all, have fun, but remember… No fish is ever worth risking your life or the lives of others.

Wishing you all tight lines and screaming reels as we close out this ice season!

Amazing trips and fun adventures are to be had on the water during the warm months in Minnesota!
Now taking reservations for the Open Water Season!